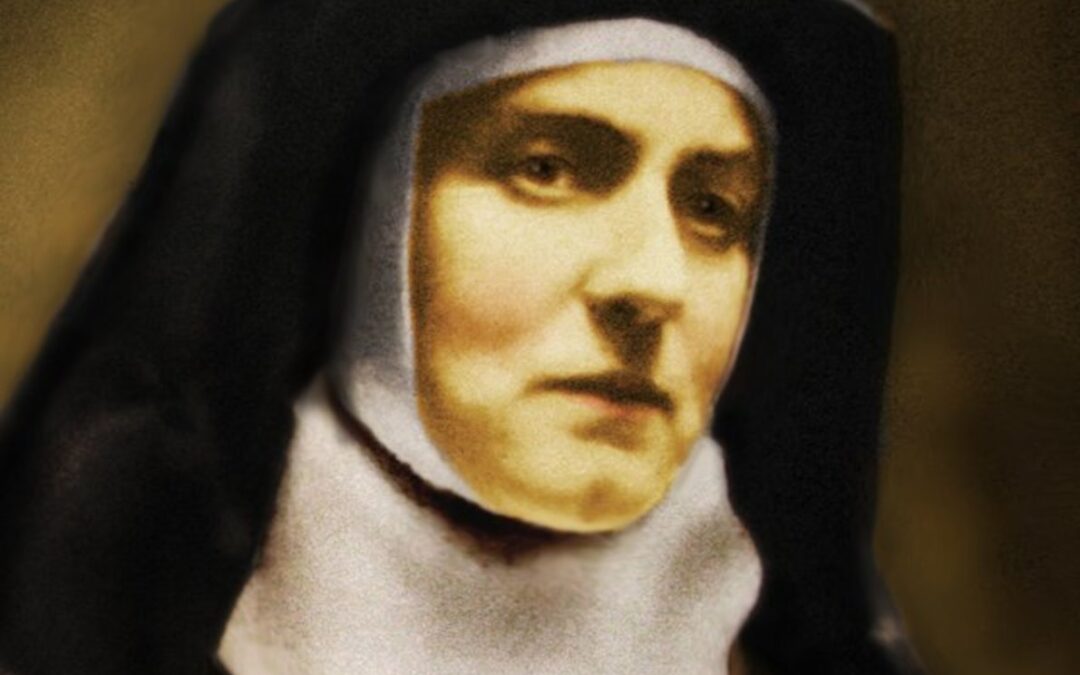 “Far be it from me to glory except in the Cross of our Lord Jesus Christ.”

The Vatican, 11 October 1998 | The message of the Cross changed the hearts of many men and women.

The spiritual experience of Edith Stein is an eloquent example of this extraordinary interior renewal. A young woman searching for the truth has become a saint and martyr through the silent workings of divine grace.

Today,  here in Rome, in St Peter’s Square, I solemnly present to the whole world this eminent daughter of Israel and faithful daughter of the Church as a saint.

Today, we bow to the memory of Edith Stein, proclaiming the indomitable witness she bore during her life and especially by her death.

Let us give glory to God for what he has accomplished in Edith Stein.

I greet the many pilgrims who have come to Rome, particularly the members of the Stein family.

I also welcome with heartfelt respect the official delegation from the Federal Republic of Germany, led by Helmut Kohl, the outgoing Federal Chancellor I. Moreover, I greet the representatives of North Rhine-Westphalia and Rhineland-Palatinate and the Mayor of Cologne.

An official delegation has also come from my country, led by Prime Minister Jerzy Buzek. I extend a cordial greeting to them.

I would particularly like to mention the pilgrims from the Dioceses of Wroclaw (Breslau), Cologne, Münster, Speyer, Kraków, and Bielsko-Zywiec who have come with their Cardinals, Bishops, and pastors. They join the numerous groups of the faithful from Germany, the United States of America, and my homeland, Poland.

Dear brothers and sisters! Because she was Jewish, Edith Stein was taken with her sister Rosa and many other Catholic Jews from the Netherlands to the concentration camp in Auschwitz, where she died with them in the gas chambers. Today we remember them all with deep respect. A few days before her deportation, Edith Stein had dismissed the question about a possible rescue:

“Do not do it! Why should I be spared? Is it not right that I should gain no advantage from my Baptism? If I cannot share the lot of my brothers and sisters, my life, in a certain sense, is destroyed.”

From now on, as we celebrate the memory of this new saint, we must also remember the Shoah, that cruel plan to exterminate a people — a plan to which millions of our Jewish brothers and sisters fell victim. May the Lord let his face shine upon them and grant them peace (Numbers 6:25 NIV).

“May such criminal deeds never be repeated against any ethnic group, against any race, in any corner of this world! It is a cry to everyone: to all people of goodwill; to all who believe in the Just and Eternal God; to all who know they are joined to Christ, the Word of God made man.

We must all stand together: human dignity is at stake. There is only one human family.

‘The new saint also insisted on this: “Our love of neighbor is the measure of our love of God. For Christians — and not only for them — no one is a ‘stranger.’ The love of Christ knows no borders.’”

For a long time, Edith Stein was a seeker. Her mind never tired of searching and her heart always yearned for hope. She traveled the arduous path of philosophy with passionate enthusiasm. Eventually, she was rewarded: she seized the truth. Or better: she was held by it. Then she discovered that truth had a name: Jesus Christ. From that moment on, the incarnate Word was her One and All. She wrote to a Benedictine nun:

“Whoever seeks the truth is seeking God, whether consciously or unconsciously.”

At the end of a long journey, Edit Stein came to the surprising realization: only those who commit themselves to the love of Christ become truly free.

This woman had to face the challenges of such a radically changing century as our own. Her experience is an example to us. The modern world boasts of the enticing door which says: everything is permitted. It ignores the narrow gate of discernment and renunciation.

I am speaking especially to you, young Christians, particularly to the many altar servers who have come to Rome these days on pilgrimage: Pay attention! Your life is not an endless series of open doors! Listen to your heart! Do not stay on the surface, but go to the heart of things! And when the time is right, dare to decide! The Lord is waiting for you to put your freedom in his good hands.

Truth and love need each other. St Teresa Benedicta of the Cross says to us all:

Finally, Edith Stein, our new saint, teaches us that love for Christ undergoes suffering. Aware of what her Jewish origins implied, Edith Stein spoke eloquently about them:

“Beneath the Cross, I understood the destiny of God’s People… Indeed, today I know far better what it means to be the Lord’s bride under the sign of the Cross. But since it is a mystery, it can never be understood by reason alone.”

Through the experience of the Cross, Edith Stein was able to open the way to a new encounter with the God of Abraham, Isaac, and Jacob, the Father of our Lord Jesus Christ.

May the new saint be an example to us in our commitment to serving freedom searching for the truth. May her witness constantly strengthen the bridge of mutual understanding between Jews and Christians [and Muslims].