The region is home. Inside my soul and within all of my being, I am attached to the splendor of its many colors, their tints and hues; and, ALL my people. I understand intuitively why neither the Palestinians nor the Israelis will ever leave.

My story is the story of many Jews. We are blessed with diversity. That we are one immortal pure-race tribe, exclusively begotten from the seeds of Abraham is spiritual. Physically, it is improbable and genetically, implausible. Nonetheless, myths abound.

What is not mythical is that many indigenous Palestinians are more heritably linked to the Ancient Israelites than most European Jews who have wandered into the Region, seeking refuge from 1,900 years of persecution, especially after World War II. Historically, many Jews in the Diaspora descend from pagan converts into Judaism.

Will a shared identity prompt the ‘cousins’ to share the land? Is there another choice?

Let us move forward from a ‘conflict,’ through ‘co-existence,’ to an eventual ‘Israeli-Palestinian Thrust to Trust.’

Enraptured Around a Golden Calf 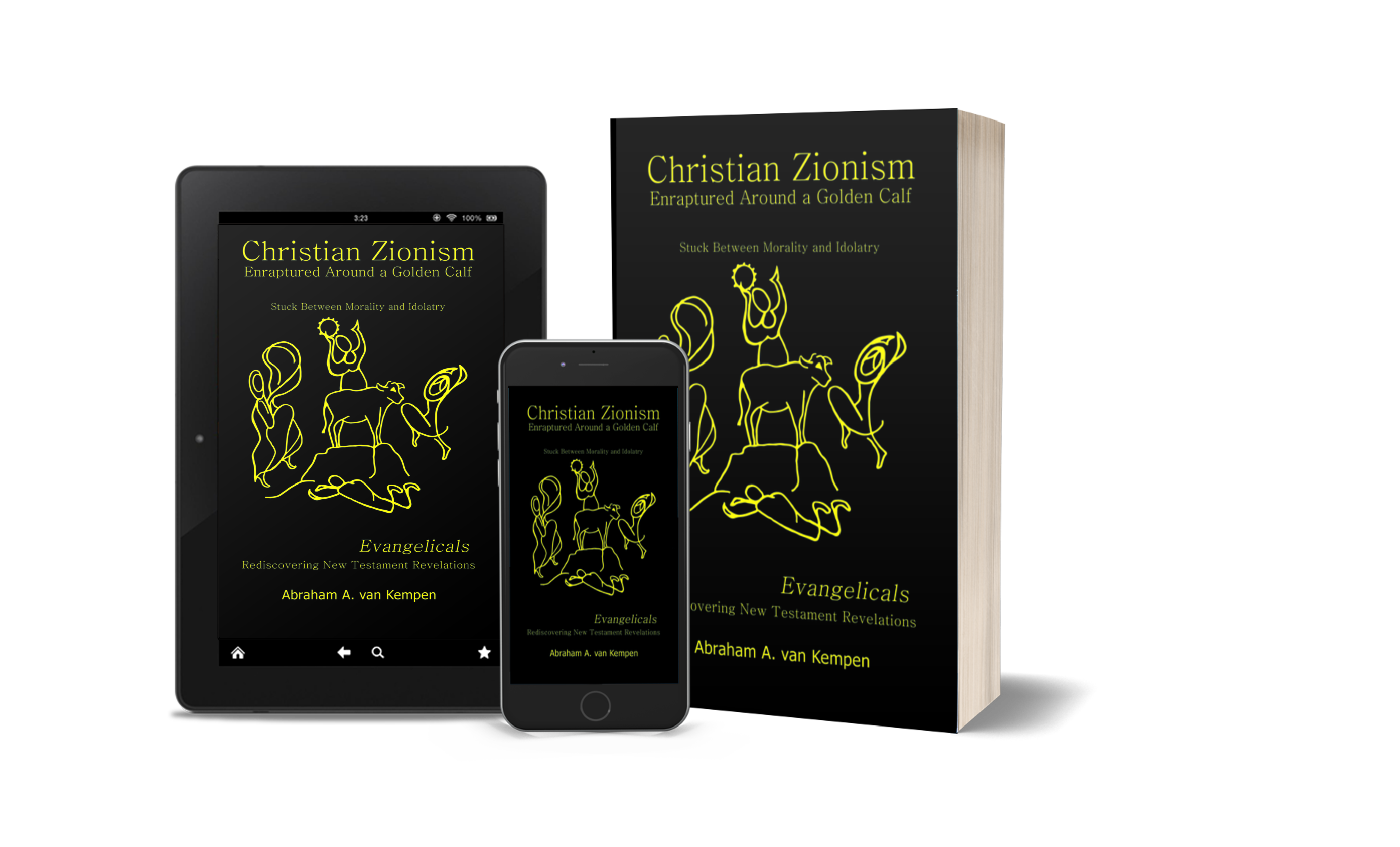 It’s a love feast sharing this 196-page theo-geopolitical eye-opener expounded with compassion, common sense, and conviction; sprinkled with lots of personal anecdotes; and, amplified with 500+ quotations, excerpts and testimonials, including more than 150 biblical references.

It was a pleasure to read Abraham van Kempen’s recent book, bearing the striking title of, Christian Zionism: Enraptured Around a Golden Calf (Fast Pencil, 2019). Here is a brief review:

I certainly agree with the author that peace and justice between Jews, Christians and Muslims, in and outside ‘the Land’ is a prime necessity. Israelis and Palestinians have to learn to trust and respect one another. The essential thrust of the book is that they would find such a rapprochement in following Jesus Christ, professed by Christians as God the Son in the Flesh.

Above all, the book is instructive for Christians, who are looking for valid arguments against the enthusiastic appreciations among many Evangelicals of the phenomenon of Zionism in its pagan and judaistic forms. I particularly like Van Kempen’s discussion of the position of Israeli historian Shlomo Sand, who fundamentally criticizes the idea that present day Jews are the genetic heirs of the Jews in the New Testament, let alone of the Israelites in the Old Testament.

Consequently, in the second edition of my book Christian Zionism Examined, I advised readers to delve into Van Kempen’s book as useful and complementary further reading material.

That does not mean that no questions have been raised. First, I wonder whether the etymology of the term ‘Jew’ isn’t historically more complicated than the author suggests? More importantly, at certain pages in the book readers may get the impression that the author is advocating a pacification or harmonisation of the relationships between the three so-called ‘Abrahamic religions’, and that Jesus plays a role in such an enterprise.

In my view, the author could have stressed more explicitly that the message of Jesus (and therefore of Abraham)  reveals the errors of Judaism, Islam and nominal or cultural Christianity, and that Jesus calls their members to conversion, in order to attract them to Himself, who is the only genuine Way to peace and justice (cf. John 14:6).

In no way should these criticisms prevent potential readers from acquiring and studying this valuable book and from taking part in the ongoing discussion about its central issue, peace in Israel and the entire Middle East. I am sure, soon there will be a third edition, in which the author is going to answer the challenging questions that he undoubtedly will receive.

Dr. Steven Paas (1942), Dutch  theologian and linguist and author of Christian Zionism Examined: A Review of Ideas on Israel, the Church, and the Kingdom (second edition to be expected in January 2020, by Wipf & Stock: Eugene OR) https://www.linkedin.com/in/steven-paas-9122ba14/

“How wonderful it is, how pleasant, for God’s people to live together in harmony! (Psalm 133: 1 Good News Translation)”

The fabric of redemption is family, a big family. We are among brothers and sisters in faith. Are we a big happy family? Not really! Divergence comes from God. It’s His ‘middle name,’ Hayah Asher Hayah. Lord Rabbi Jonathan Sacks hits the nail on the head: “The Bible is saying to us the whole time: Don’t think that God is as simple as you are. He’s in places you would never expect him to be.

‘Hayah Asher Hayah’ is mistranslated in English as “I am that which I am.” But in Hebrew, it means “I will be who or how or where I will be,” meaning, don’t think you can predict me. I am a God who is going to surprise you. Don’t think we can confine God into our categories. God is bigger than religion.”

Trust God! Seek God’s wisdom. Listen to God’s voice. When you read scripture, let God speak to you. And give me the opportunity to keep you company from time to time. Please join my newsletter. Divergence stirs people of God to proactively build bridges toward convergence.