Essay | Israel’s Final Solution … To Be or Not! 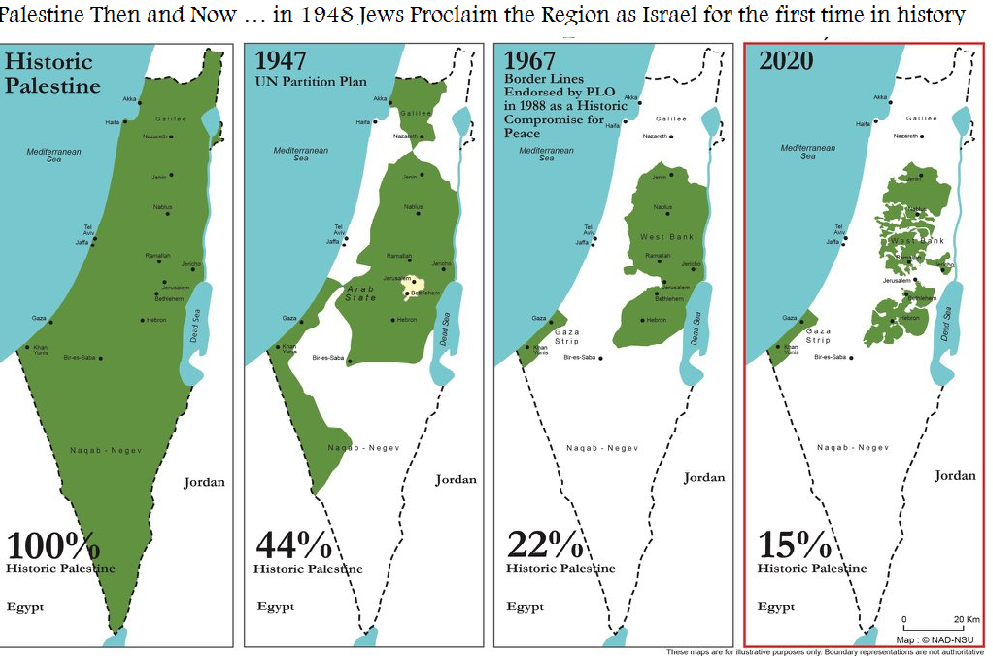 Look at the Maps! Look again! What strikes you?

Israel has declared itself as the Supra-national State for Jews-Only, the exclusive homeland for all 15 to 20 million Jews alive worldwide. Many Jews, including members of the US Senate and the US House of Representatives, are also Israeli citizens whether they live full-time in Israel-Palestine or not. Compare the number of 15 to 20 million Jews on earth to the roughly 5.6 million Israeli- Jews residing full-time in Israel-Palestine today.

In the greater region, Palestinians (referred to in Israel as ‘Arabs’) exceed the population of the Israeli Jews by a two-to-one margin, as follows:

How can or how will the 5.6 million Israeli-Jews further drive out their 6.7 million’ cousins?’ It isn’t that they haven’t tried. Many of the 71 million American Evangelicals with their 600 million followers worldwide are in on the act, too. To no avail! Only an act of God will cause them to abandon their ancestral land and to renounce their heritage sealed by Covenant.

In March 2016, the Israelis and the Palestinians were again provoked by yet another study. As reported by Naomi Zeveloff in Forward Magazine’ new’ analysis of data from the Pew Research Center’s study, arguably ‘upholds’ that nearly half of all Israeli Jews want Palestinians expelled from their midst. No one has bothered to ask: ‘where to?’ To Europe; the United States?

So, what if the question is rephrased to reach the soul of every Jew, religious or secularist:

“Would you want to gather and load up all Palestinians on flatbed trucks; those who are documented as Israeli citizens and those who are undocumented and ghettoized as stateless captives, subsisting in the occupied territories, not going anywhere; and, haul them away, with barely clothes on their backs, blistering under the burning desert sun, to perhaps an Israeli secret processing plant, to be gassed until death; and, the Israeli Defense Forces (IDF) grabbing the loot to be divided among all the winners of war, like the kibbutzim, Israel’s spacious farming communities, ‘built on the ruins of hundreds of Palestinian villages, ethnically cleansed; an occupation that has crushed the rights of Palestinians and caged them into ever-smaller holding pens?'”

What a painful memory of the horror that only victims can feel and share, victims on all sides? 1

Mainstream media pinpoint, magnify, and broadcast Israeli bombing as self-defense, a ‘response’ to terror perpetrated by Hamas. They deny their television audiences and readers to become fully apprised of the fundamental issues:

And when some media outlets happen to show the losses on the Palestinian side, they often parrot the Israeli army’s double-speak, proclaiming the onslaught only aims to target Hamas’ fighters and the tunnels threatening Israel’s security, when most casualties are civilians.

In war, truth becomes its first casualty; the rule of law becomes academic.

From 2001 through 2013, the Palestinian Resistance has launched 4,890 mostly amateur rockets and hurled 15,047 mortar attacks into Southern Israel. They have terrorized the Israelis with fear. But few Israelis were killed and injured. Within a span of thirteen (13) years, Israel suffered a grand total of 28 deaths and 1,971 wounded. Palestinian resistance’s rockets follow indiscriminate trajectories, flight paths invariably going to ‘nowhere on the vast open Negev Desert, exploding on land or, when intercepted, in thin air. Look on the map. Gaza is located next to the sparsely populated Negev.

It is truly David, the Palestinians, versus Goliath, the Israelis. Israeli’s military prowess – a highly disciplined 1) Israeli Defense Force (IDF) together with 2) Mossad, Israel’s foreign intelligence service, and 3) Shin Bet, Israel Security Agency (ISA) (working undercover or ‘Magen veLo Yera’e’ (Hebrew: lit. ‘Defender that shall not be seen’ or ‘The unseen shield’), and working alongside 4) Aman, Israeli’s military intelligence and 5) a network of Palestinian spies.

In Israel, the term ‘overkill’ has become an understatement. 2

I worry. I want Israel – Palestine to survive. I am of Jewish descent. I, too, have a spiritual connection to the land. The region is my home, born as a refugee on the outskirts of Israel – Palestine on the Red Sea, a British Ship of Dutch parents. Inside my soul and within all my being, I am attached to the splendor of its many colors, their tints, and hues. I do not know how to explain my love and deep devotion to the land, but I understand intuitively why neither the Palestinians nor the Israelis will ever leave. 3

Hagar Calls God: “The Living One Who Sees Me”

How does God treat the Bible’s first homeless single mother, cast out by the biblical Abraham, the Patriarch of Many?

Hagar is the only person, male or female, in the Hebrew Bible to ever speak and name God directly:

God promises Abraham that he will have many generations through Isaac and Jacob. He promises the same to Hagar, which means Hagar is, in effect, a female ‘patriarch,’ the first matriarch.

Though Abraham expels Ishmael into the desert, he never leaves Abraham’s realm of love and paternity. What’s more, Ishmael never leaves the sphere of God’s blessings.

Interestingly, the text seems to be bending over backward to create a balance to affirm that Abraham has no favorites. In one of the most haunting and overlooked passages in the Hebrew Bible, Genesis 25: 9 NIV, Abraham’s sons Ishmael and Isaac, rivals since before they were born, estranged since childhood, leaders of opposing nations, come, stand side by side, and bury their father.

Abraham achieves in death what he could never succeed in life, this moment of reconciliation. A hopeful side-by-side flicker of possibility when they’re not rivals or warriors, Jews, Christians, or Muslims. They are brothers.” 4

Jerusalem’s future must be shared not monoploized

How Muslim faithful in Jerusalem savored the essence of Ramadan
https://www.arabnews.com/node/1857931/middle-east

*The indigenous Palestinians in historic Palestine and in the Middle East.