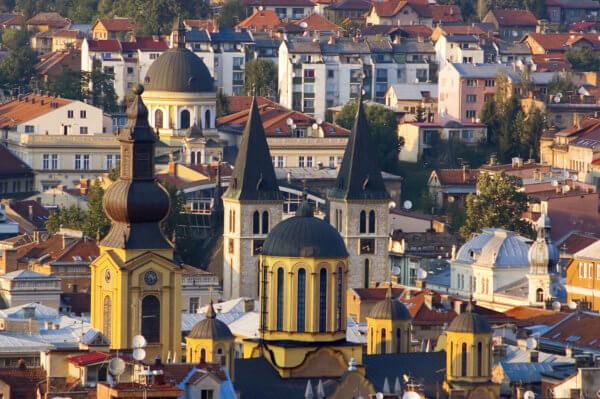 Sarajevo was the first European city to have a Catholic Church, Jewish Synagogue, Orthodox Church, and Islamic Mosque in the same neighborhood

In this region, for many centuries East and West have met and not infrequently come into conflict. For a long time, there has been the experience of the coexistence of different cultures. It has enriched the region with its values. In Bosnia-Hercegovina, there live side by side with the South Slavs, united in common ancestry though divided by history. In this capital city, Sarajevo, you have witnessed in your past the rise of the Catholic cathedral, the Orthodox cathedral, the Muslim mosque, and the Jewish synagogue. These four edifices are not only the places where believers in the one God profess their faith. They are also a visible sign of the kind of civil society that the people of this region wish to build.

The tensions which can develop between individuals and ethnic groups as an inheritance from the past and as a consequence of proximity and diversity ought to find in religious values reasons for moderation and restraint. The goal is to understand with a view to constructive cooperation.

After so much suffering, Bosnia-Hercegovina is finally committed to building peace. This is not an easy undertaking, as the experience of the months since the end of the conflict has shown. Nevertheless, with the help of the International Community, peace is possible. Indeed peace is necessary. From a historical perspective, Sarajevo and the whole of Bosnia- Hercegovina, if they succeed in setting up their institutional structure in harmony, can become, at the end of this century, an example of coexistence in diversity for many nations experiencing this same difficulty in Europe and elsewhere in the world.

Dialogue must be conducted with respect for equality of rights, guaranteed to individual citizens by appropriate legal means, without preference or discrimination. An urgent effort must be made to ensure that everyone can be guaranteed work, which is the basis of recovery and development while respecting human dignity. An effort must be made to ensure that the exiles and refugees, in whatever part of Bosnia-Hercegovina, can exercise the right to recover the homes they had to abandon in the turmoil of the conflict.

Equality of rights must be granted to ethnic-religious communities. Bosnia-Hercegovina is a mosaic of cultures, religions, and ethnic groups which, if recognized and safeguarded in their diversity, can contribute their respective gifts to enrich the one patrimony of civil society.

Despite the difficulties, obstacles, and hindrances, let hope never fail! God does not abandon peacemakers.

I implore him, the almighty Lord of the universe, to grant everyone his consolation and to strengthen generous resolutions of sincere dialogue, proper understanding, and mutual commitment to reconstruction and peace in people’s hearts.

Apostolic Journey of His Holiness John Paul II to Sarajevo (April 12-13, 1997), Address of The Holy Father to the Political Leaders Of Bosnia-Hercegovina, 13 April 1997