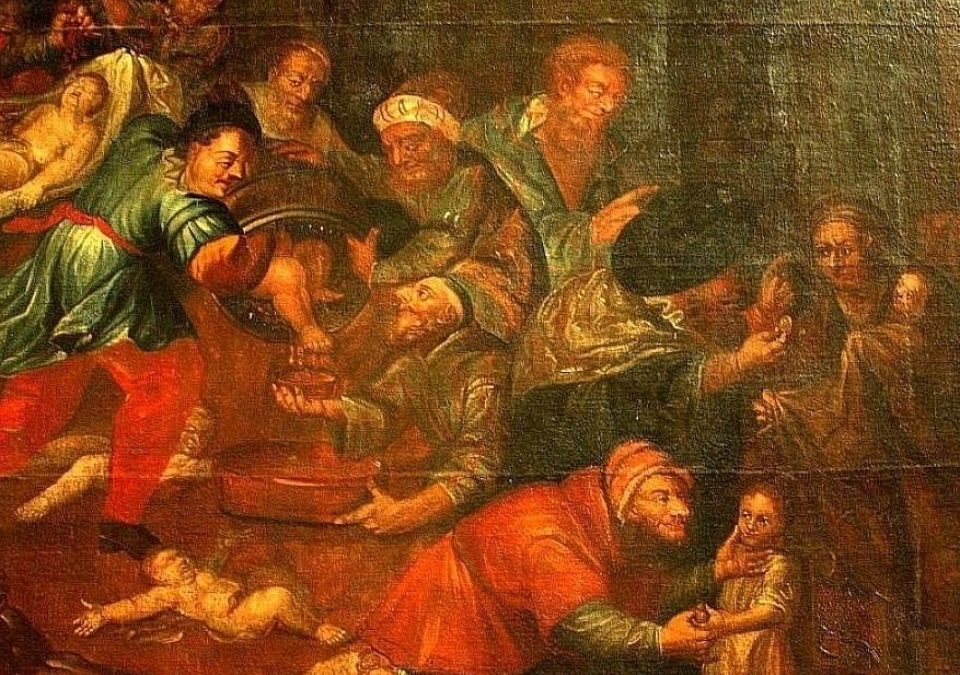 A Demonic Plague! That’s what Evangelicals, poised in Spiritual Warfare, would say. It inflicts the best and worst of us by counterfeiting goodness and falsifying holiness that blinds and mesmerizes the weak and strong. It’s so enticing and more tantalizing to trust angels of light. How does one discern good from evil? Use your head! To discern, you align your spirit (mind) with God’s Spirit (God’s mind). Think things through. Follow God. The ‘Church of England report admits Christian anti-Semitism helped lead to the Holocaust,’ suggests that many Christians act like mindless sheep following other mindless sheep.

Few discern that spiritual wolves, disguised in sheep clothing, beguile and deceive us. For millennia, while waving the Banner of Holy Goodness, Jews, Christians, and Muslims have persecuted and slaughtered each other. Neither is less culpable. If we could just see God in the face of the other, we could free ourselves from the strongholds that foster anti-Christian, anti-Semitic, and anti-Islamic predispositions.

The article, ‘Church of England report admits Christian anti-Semitism helped lead to the Holocaust,’ makes me jitter. Yes, Christians have persecuted Jews for 1,900 years. And, yes, among Jews, it’s yesterday’s news that the Church could have done more to prevent the Holocaust. What’s more disturbing, why am I one of the few who call on Evangelicals to desist, STOP adding fuel to the fire by aiding and abetting Israeli atrocities against a defenseless people, their neighbors, the indigenous Palestinians?

Why do most Jews view themselves as the prime victims during a war when Christians slaughtered between 44 to 51million other Christians, of different nationalities, and in the Pacific theater, when Asians slaughtered six to ten million other Asians, of other faiths? Historically, haven’t Jews persecuted Christians; Muslims? Worse, what about Christians persecuting other Christians; Jews, persecuting Jews; Muslims, persecuting Muslims, all in the name of God? (*Chapter 2: Still Wandering; Sub-chapter 2.8: Hey Cool it Shimore; Pages 60 – 61; Kindle Locations 1042-1060).

How can the world transcend from this curse? Author John Paul Lederach in ‘Reconcile … Conflict Transformation for Ordinary Christians’ suggests: “learn to reconcile from the biblical Jacob and Esau!” Hint: surrender; submit to God!

The biblical scoundrel, ‘Jacob,’ reconciled with God at a place “where I have seen God face-to-face.” After making peace with God, God changed Jacob’s name to ‘Israel.’ Now, it’s time to face his brother, Esau, after fleeing from him for twenty-five years. The former Jacob, the renewed Israel, swindled and conned, fleeced, and duped Esau from his birthright. Jacob, the proverbial fugitive, feared for his life and fully expected Esau to kill him.

“Jacob then crosses the stream, climbs the plateau, and puts his wives, children, and servants behind him. Out across the plateau, he sees his brother, Esau, coming with hundreds of men. Jacob then kneels on the ground, crawling and bowing before his brother seven times. But Esau, seeing his brother, leaps from the horse and runs to lift him. They embrace, kiss, and weep.

“Why were you sending me all these gifts?” Esau asks.

“I wanted to find your favor,” Jacob answers.

“I have enough,” Esau declares.

God blessed both Esau and the renewed Israel. Jacob wrestled with God and said, “I won’t let go until you bless me.” Esau must have wrestled and reconciled with God, too. Both brothers must have seen the face of God in the face of the other.

And throughout history, the pendulum swings back and forth.

‘New’ analysis of data from the Pew Research Center’s study in March 2016, arguably ‘upholds’ that nearly half of all Israeli Jews wants Palestinians expelled from their midst. No one has bothered to ask: ‘where to?’ So, what if the researchers rephrase the question to reach the soul of every Jew, religious or secularist:

“Would you want to load up all of Israel’s Palestinians on flatbed trucks; those who are documented as Israeli citizens and those who are undocumented and ghettoized as stateless captives, subsisting in the occupied territories, not going anywhere; and, haul them away, with barely clothes on their backs, blistering under the burning desert sun, to perhaps an Israeli secret processing plant, to be gassed until death; and, the Israeli Defense Forces (IDF) grabbing the loot to be divided among all the winners of war, like the kibbutzim, Israel’s spacious farming communities, ‘built on the ruins of hundreds of Palestinian villages, ethnically cleansed; an occupation that has crushed the rights of Palestinians and caged them into ever-smaller holding pens?'” (*Chapter 4: If You Grab Too Much, You’ve Grabbed Nothing; Sub-chapter 4.14: To Be or Not to Be; Page 106; Kindle Locations 2006-2017).

What a painful memory of horror that only victims can feel and share, victims on all sides. As I have stated to President Obama and others, “Despite Israel’s lethal arsenal, it goes against Israel’s collective conscience to sentence the Palestinians to a Final Solution. There is also good in the Israeli character. For many, certainly, for my mother, the concentration camp has been a breeding ground for compassion and tolerance. So, another Holocaust, especially on shared soil, is out of the question (*Chapter 4: If You Grab Too Much, You’ve Grabbed Nothing; Sub-chapter 4.3: A Prayer Without End; Page 95; Kindle Locations 1766-1770).

It’s time to face each other and encounter the face of God on the other.

Postscript: Why does Esau come with four hundred horsemen? To kill? No! To help? Yes!

Scroll all the way down on the homepage of www.buildingthebridge.eu. Read the quick blurb: In case there is any question about what our role in the world should be, it could be to leave it a better place. Can we do what is right?

As a response to ‘a tooth for a tooth or an eye for an eye,’ one could choose to give a tooth or to give an eye if needed and warranted. That is what bridge building is about. Be part of building the bridge.

Get on board to envision an extraordinary adventure with life-changing and life-giving possibilities.