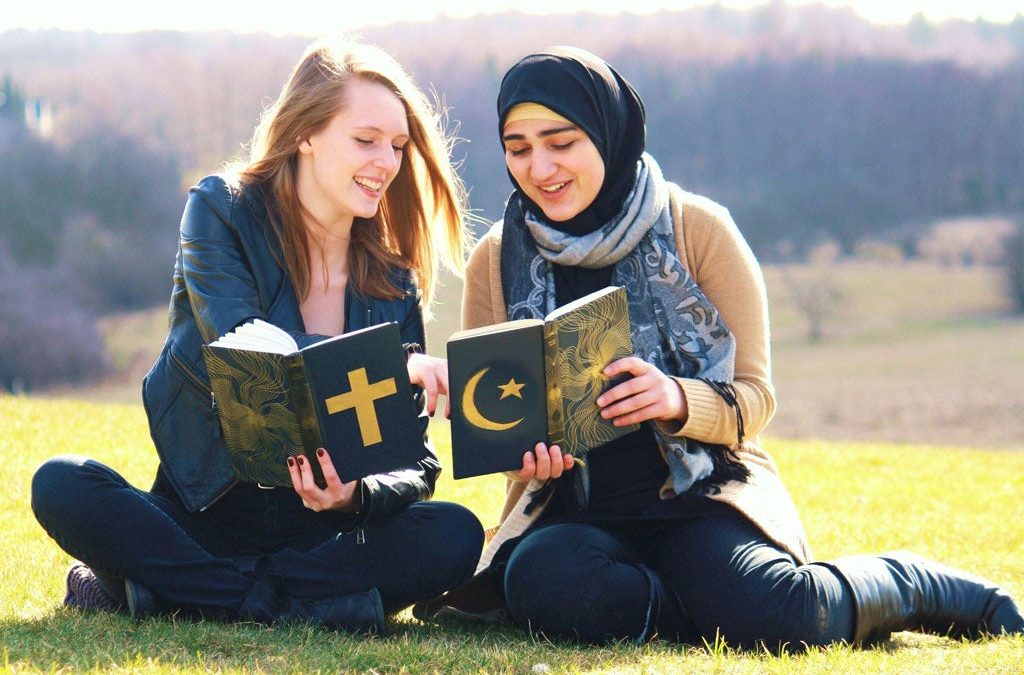 Hang on to your hat, or should I say head! The world is changing fast. In our times, we’re beginning to see Jews, Christians, and Muslims marrying the other. God still sits on his throne.

In his 1985 historical breakthrough, ‘Address of His Holiness John Paul II to Young Muslims,’ at the invitation of King Hassan II of Morocco, Saint Pope John Paul II spoke to a group of young Muslims for the first time:

“It is of God himself that, above all, I wish to speak with you; of him, because it is in him that we believe, you Muslims and we Christians.

We, Christians and Muslims, have many things in common, as believers and as human beings. We live in the same world, marked by many signs of hope, but also by multiple signs of anguish.

Abraham exemplifies faith in God, of submission to his will; and, confidence in his goodness. We, in our Abrahamic beliefs – Jews, Christians, and Muslims – worship the same God, the one God, the living God, the God who has created the world and brings his creatures to their perfection.

I also want to speak with you about human values, which stems from God. These values concern the blossoming of our person, notwithstanding that of our families, our societies, and the international community. Is the mystery of God not the highest reality that gives meaning to life?”

My wife and I have written the letter below to a mixed couple.  One is a pious Christian; the other, a devout Muslim. Those who are closest to them tend to torment them the most, despite, “What, therefore, God hath joined together, let not man put asunder” (Mark 10: 9).

“We would like to propose, not impose upon you, our viewpoints that might help you both dignify your differences and work through your impasse. We are incessantly in search of truths. Truth, like God, is infinite. It has taken us a lifetime to come to a number of conclusions, some of which are still evolving. Truth challenges the imagination, especially when one critically questions, examines, and scrutinizes; and biblically and empirically verifies truth. If our thoughts have any validity, they must be aligned with God’s character.  God is central. We are by no means perfect. Often, we think we are on the right path only to find out later we’ve made a wrong turn and are about to collide onto a brick wall or, worse, sliding off from a slippery slope into a ravine. Welcome to humanity.

Don’t presuppose God. Justifiably, you are both concerned, if not petrified, how you should raise your children. Don’t worry! Just love them. Exemplify the love that you have for each other. Your devotion to each other will speak volumes. Enrich your children with your multicultural heritage and upbringing. Entrust God to take care of them, too.

When Moses at the burning bush asks God, ‘Who are you?’ God says to him three words: ‘Hayah asher hayah;’ in Hebrew: ‘I will be who or how or where I will be,’ meaning, don’t think you can predict me. Don’t presume God is as simple as you are. He’s in places you would never expect him to be. God is bigger than religion. ‘I am a God who is going to surprise you.’ (*Page 146; Kindle Locations 2960)

‘… the Qur’an [authenticates] confirms [Holy] books such as the Torah, the Psalms, and the Gospels.

… the Qur’an teaches that the Holy Spirit has supported Jesus from the moment of his birth.

As such, every word Jesus utters is Gospel [Good News]. He is the Injeel as the Qur’an calls the Gospels.

Hence, we Muslims revere Jesus, and we consider every one of Jesus’ principles worth following as confirmed in the Qur’an.

Also, forgiving transgressors is an integral concept in the Qur’an, and believers are always urged to forgive …’ (*Page 153; Kindle Locations 3113).

Dr. Kaskas has co-authored The Qur’an with References to the Bible together with the late Dr. David Hungerford, a dedicated Christian scholar.

Both Safi Kaskas and David Hungerford are born again in their respective traditions. Both have surrendered their lives to the God of many names: Safi, to Allah (the Arab sound-alike of the Hebrew Eloha); David, to Jesus, another name of the same God.

Allah (God) and Jesus (God) are the same. All who believe in Jesus believe in Eloha or Allah, in short, God. If one submits to God, one submits to Jesus and vice versa. The Talmud assures all God’s children: “In the place where the repentant stands, even the completely righteous man cannot stand” (*Page 129; Kindle Locations 2582-2583).

As John Paul II has said: ‘There is a mystery thereon which, I am confident, God will one day enlighten us.’