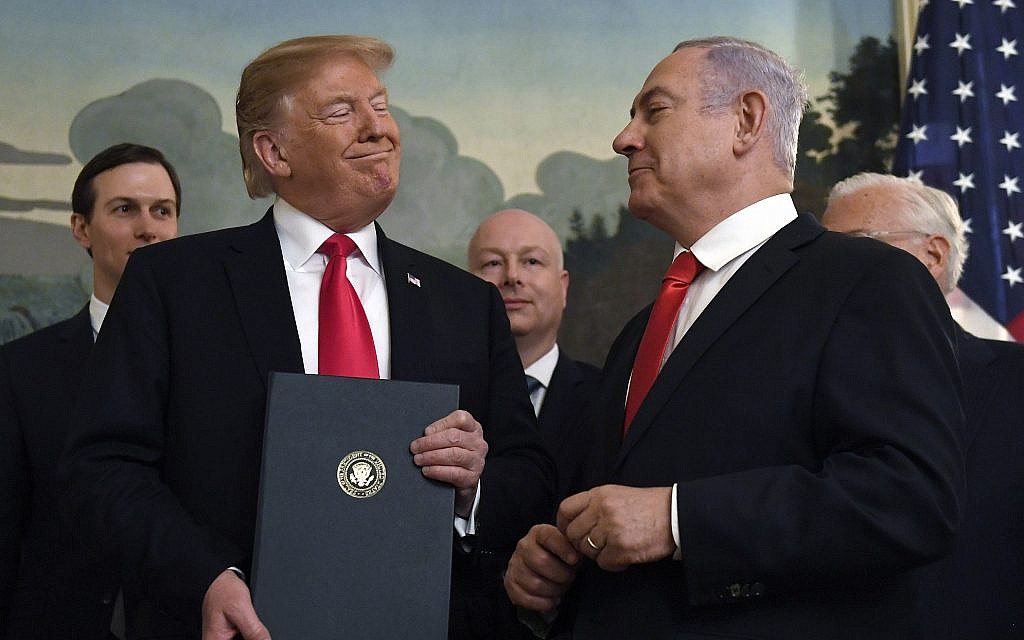 What can the world expect from Trump’s ‘Deal of the Century?’

How does Trump’s Deal compare to: Oslo, Ottawa, Shepherdstown, The Wye Plantation, Annapolis, Geneva, Madrid, Nicosia, Washington, D.C., London, Bonn, Vienna, Paris, Bahrain, and …? Lots and lots of fanfare. The spin doctors are having a field day. But the party is for neither the Israelis nor the Palestinians but almost solely for the politicians. See Netanyahu going to Washington in his gleaming Boeing 777; with Gantz sharing the cockpit? You’ve got to be braindead to presume that this time, the peace festivities won’t result in another deadlock with yet another stalemate and more standoffs; one foot in the stirrup, the other in the sand; widening the schism and deepening the quagmire.

The real agenda is to seek peace with Trump’s die-hard supporters to win the Trump-Pence ticket in 2020. Israel is their Holy Cow, their Golden Calf, idolized and worshipped by many of the 70 million Evangelicals in the United States and their 600 million followers worldwide. It’s God’s will, they believe, to aid and abet Israeli atrocities to steal, kill, and destroy. Nothing can be more anti-Christian, anti-Semitic, anti-Muslim.

On page 54, Kindle location 929-93, in my book I cite Vice President Michael R. Pence as saying: “For my part, my Christian upbringing compels me to cherish Israel. The songs of the land and the people of Israel were the anthems of my youth,’ to which Shimone, my Israeli friend responded with: “Such a schmuck,” (*Page 55; Kindle Location 941),

“Pence doesn’t care about us. He doesn’t even know us, understand what it means to be an Israeli.

I read his speech twice – thanks for e-mailing it to me – but he’s not talking to us or about us. It’s about Pence. It’s about Trump. It’s about their support base. It’s about ‘get out the vote.’ The Evangelical Christian Right – and they don’t know a thing about us – slid Trump and Pence into the White House.

Abraham: But why the temper tantrum? Isn’t it ‘politics as usual?’

Shimone: Abraham, you really want to know why I’m so pissed?

Shimone: Call it what you want! We Israelis and Jews in general are not the masters of our own fate, contrary to Israeli Hasbara [propaganda]. We are totally and completely dependent on American money … and, the people of the world think it is Jewish money. Can a mere 15 or so million Jews, all the Jews alive today finance the insatiable Israeli thirst for weapons of mass destruction? No! Look at the numbers! There are 70 million Evangelicals in the United States with 640 million followers world-wide compared to only 15 million of us with less than half residing full-time in Israel. I’m an Israeli citizen and resident of Israel but I live mostly in the United States. I cannot imagine that more than 3 million Jews around the world support the far-right ultra-nationalism presently ruling Israel. I can assure you, according to Google, more than 50 million Christian Zionists in the United States support the ilk of Netanyahu and his henchmen; and, they carry a big stick in Washington DC. (*Page 55-56; Kindle Locations 946-959).”

“Ready for a mouthful?” counters Ariel.

“In Israel, the Christians [Evangelicals eds.] are the butt of just about every joke. Reportedly, they add $500 million to the Israeli economy through tourism and direct donations. All of Israel is laughing to the bank, with the religious settlers, heading to the next settlement.

Thank you, Evangelicals. And, because of their numbers and political influence in Washington DC – 50 to 70 million Evangelicals in the United States with 600 million or so followers worldwide – the United States government aids and abets Israel’s brutality and ruthlessness with $6 million a week. They’re the gift that keeps on giving.”

Ariel continues: “These Christians [Evangelicals] are a bunch of ‘freiers’ [Yiddish for suckers eds.]”.

Yusuf: Israel must expand its lebensraum for Jews ‘uber alles,’ a pure race before Jesus will come down to Jerusalem.